Pat Quinn commanded respect amongst his players, amongst his coworkers, and amongst his peers. He was a man of integrity, who knew how to surround himself with good people and then how to get the most out of them. He is also one of the most recognizable faces in Canadian sport, a man who has made an enormous contribution to sport in British Columbia as an athlete, coach, general manager, and owner.

Born in Hamilton, Quinn played for the Steel City’s Tiger Cubs and Kilty B’s in the Ontario Hockey Association, before moving to play alongside fellow futureNHL general manager Glen Sather on the Edmonton Oil Kings, who captured the 1963 Memorial Cup. After six years toiling in the minors, he made his NHLdebut with the Toronto Maple Leafs in 1968-69.

Quinn first came to Vancouver as a member of the Canucks’ inaugural NHLteam in 1970, playing two seasons as a hard rock defenseman and a popular leader on and off the ice. After retiring following a nine-year NHL career, he became a remarkably successful NHL coach and general manager guiding several NHL clubs including Philadelphia, Los Angeles, Vancouver, Toronto, and Edmonton. During his first full season with the Flyers, Quinn guided the team to a record 35-game unbeaten streak and a trip to the Stanley Cup Finals.

Quinn returned to the Cup Finals at the helm of the Canucks in 1994, taking the team to within a goal post of defeating the Rangers in Game Seven. His eleven-season stint from 1987-97, as the Canucks’ coach, general manager, and president, was a turning point in the franchise’s history, rebuilding the organization from top-to-bottom into one of the best in the game. Today, he holds the fifth highest all-time winning percentage amongst NHL coaches with 657 wins to his name. Twice, he was awarded the Jack Adams Award as the NHL’s coach of the year.

Internationally, few coaches have achieved success at all levels to match Quinn’s. He coached four Canadian teams to world championships: the 2009 U-20 men, the 2008 U-18 men, the 2004 World Cup of Hockey, and, of course, the 2002 Olympic Winter Games, Canada’s first Olympic hockey gold in fifty years. He returned to coach Team Canada again four years later at the 2006 Winter Olympics in Torino. As general manager, he guided Team Canada to the 1997 world ice hockey championship and a silver medal at the 1996 World Cup of Hockey.

Quinn’s work in the community is second-to-none, devoting countless hours to many charities and organizations ranging from the Vancouver Giants, Canuck Place, Greater Vancouver Open, the Hockey Hall of Fame, and the Hockey Canada Centre of Excellence. In 2012, Quinn was the recipient of the Order of Canada. Earlier, he was honoured with induction into the BC Hockey Hall of Fame in 2002 and as the inaugural recipient of the Jack Diamond Award in 1995.

Written and researched by Jason Beck, Curator of the BC Sports Hall of Fame. 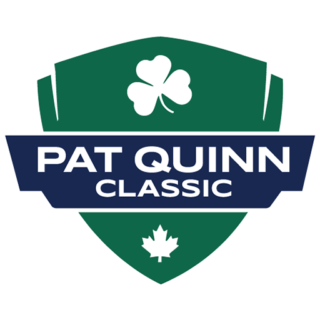